Well it's been an interesting few days. Nothing much to add today, and Mrs. Uppercut is demanding that I do some other stuff, so I'll just offer you these few thoughts.

Ralph is protesting wildly and desperately trying to get me to play with one of his collages .The reason for that is that he's still trying to sell you a false comparison. He wants you to believe that a tiny, unfocused portion of a large picture shot from distance will have the detail and clarity of a shot taken from a few feet away. That's why he offers you garbage like this, cropping the Altgens portion as much as he thinks he can get away with and the Groden one to remove most of the vertical white line seen in Altgens. 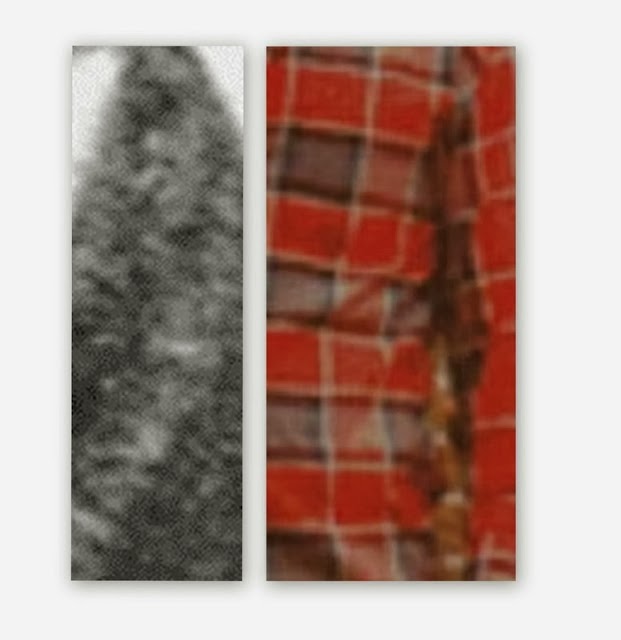 Notice, however, that he had to leave SOMETHING in - and we can both horizontal lines and a vertical one in the Altgens part ( And no Ralph, I'm not pointing them out to you. I've already done it, and people can see what I'm talking about. )

Altgens doesn't contain the same level of clarity and detail as a close up shot, as we've seen using one of Ralph's own pictures. There's absolutely no reason to think that it should. The only way Ralph could get a box to appear on his shirt in Dealy Plaza was by wearing one with a huge white square on the front and then attempting to claim that that's in some way a meaningful result which is comparable to Lovelady's shirt pattern. It isn't. It never was.

But there IS detail remaining in the Altgens photo, and that's what I'm showing here.  As we've seen, I've presented my evidence and explained the steps I took. And here's the thing.

It's not rocket science. There are no tricks.  Anybody with a basic knowledge of graphics software can sit down and do the same thing. ( And anybody who's already familiar with this stuff will do it in minutes and in all probability do it better - I had to learn how to do it first ). I used free software. Hell, with a bit of effort even Ralph could do it.

And ignore Ralph's attempt to muddy the waters by speculating about my identity or claiming that I'm an "op", as if that in some way affects the validity of what I'm showing you. It's a false argument. The evidence I've shown stands on it's own merits. It is what it is. And that would still be true even if I posted tomorrow saying that I'm David von Pein. ( that's a joke Ralph ).

I'm claiming no special credit for noticing the pattern. Most people who look at the clearest version of Altgens 6 can see it anyway. I'm just presenting it in a way which makes it immediately obvious and cuts out the bogus comparisons offered to you by the O.I.C. That's all.

So by all means try it yourself. The only way any of that pattern matches up is that Doorman is wearing Billy Lovelady's shirt.

He is. That's because Doorman is Billy Nolan Lovelady.

And the only update on this post. I've got stuff to do.

Two things.
The shot he shows you as a "true" depiction is hopelessly blurred and is probably from a magazine reprint which has been uploaded countless times. I don't know without checking and he probably doesn't know himself. It doesn't matter because the Groden doorway scan is the closest thing to the original  he's ever going to see unless he gets off his lazy ass and goes to the National Archives. Oh wait....Ralph....research....not gonna happen.

And I already did one of those Ralph. I chose this one - 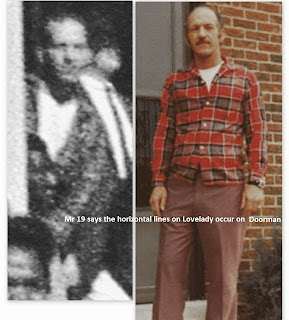 See Ralph, the way this works is that I've refuted your evidence. You're supposed to attempt to refute mine.

And shove your instructions where the sun don't shine. Whoops, that's three things. My bad....