Well that all makes sense now Ralph, thanks.

In Ralph's "Rules of how to present the evidence so I can cheat" it's fine to draw in stuff which doesn't exist .. 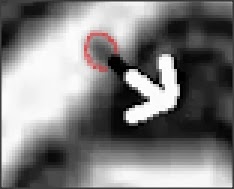 Notice that what Ralph found ( which is in the red circle ) has to be augmented by a black line coming off the forearm and a white arrowhead to make it into anything at all.

At this point I would have quoted some of Ralph's text to make the point that he's lying again, but he's suddenly become pretty paranoid about that and disabled right clicking on his blog. In future I'll just screengrab anything that I want you to see directly, but as I've always said I'll provide the links to Ralph's articles so you can head over and check the lies for yourself.

I'm too pressed for time to do screen grabs right now, so I'll just point out that despite his claims not to have marked the forearm he's had to draw a black line on it to give the impression that such a line exists. And then draw in a big white arrow which he wants you to think is there while trying to claim that the "area of examination" shouldn't include the very place where the arrow is supposedly located.

However, while pointing out that there's nothing that Ralph won't lie about is fun, let's not forget that what he's engaged in is simple evasion. Ralph's imaginary arrow isn't the topic under discussion, I only mentioned it to draw attention to the fact that he's a massive hypocrite. In several days now there's not been a single credible attempt to refute this -

He can't refute it.
He won't show it.
He begs people not to look at it.

It's time to start seriously questioning the motives and integrity of everybody involved in the O.I.C scam.

The thick black line in your picture has nothing to do with the image in the History Matters archive, which I've enlarged here. 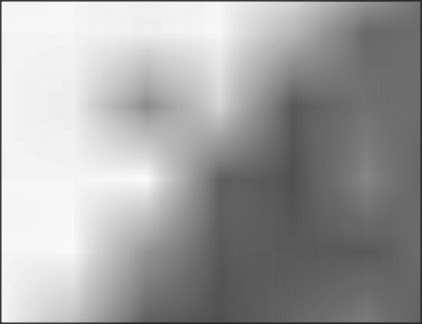 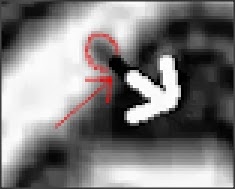 Let's hope that EVERYBODY takes you up on your suggestion to go there and try it for themselves. Here's the link -

Any more holes you want to dig for yourself? Busted yet again...your miniscule membership must be so proud of you.

And furthermore Ralph, copies of CE 369 are quite hard to find on the net. I've searched carefully and can't find that terrible copy you use anywhere except in your posts, so unless you provide a link to the site you got it from we're going to have to assume that it only exists in your posts and on your hard drive. Which would mean the reason it's so very bad is because.......no........surely not Ralph?

And don't forget that the invisible arrow is meaningless -

Billy Lovelady was in the doorway.