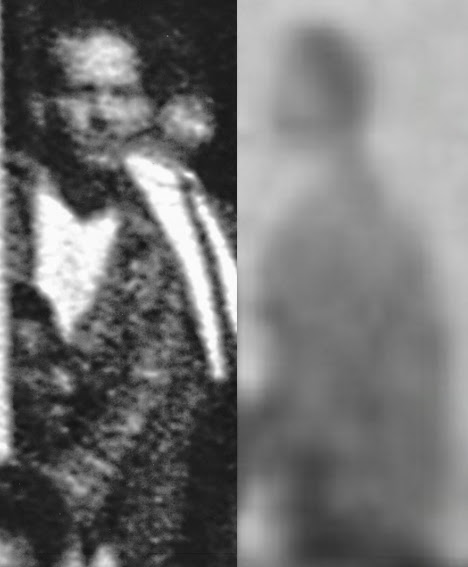 Here, Ralph is referring to the Altgens image of Billy Lovelady, on the left above. I have shown on this blog that although this tiny portion of the Altgens photo does not contain suficent detail to show the pattern perfectly, the detail that does remain in the picture is a perfect match to Lovelady's red plaid shirt.

Ralph's only answer to this match has been to lie about it. According to Ralph, it's all "haze and distortion", which by pure coincidence has formed itself into the black-over-white and white-over-black pattern of Lovelady's shirt. Yet Ralph has repeatedly told us he's a man who doesn't believe in coincidences....go figure.

( Note that when Ralph refers to "Gorilla Man", he simply means Billy Lovelady in the Martin film of the TSBD Doorway. "Gorilla Man" is simply a Ralph Cinque fiction caused by his inabilty to comprehend anything about the way photography and film work.Well that, in combination with Ralph's propensity for using the worst possible images and altering them if he thinks he can get away with it, but we'll look into that at another time ).

Now the above quote is Ralph talking about the image on the right above - a frame from the Couch film taken after the assassination. But the difference is this - here, he really wants you to believe that this unidentified figure ( barely recognisable as a figure at all in Ralph's crop ) is Billy Lovelady in order to sell the notion that he wore a red and white striped shirt. Suddenly, haze, distortion and blur become unimportant to him, and in this image he can see a pattern.

Not only that, but this blurred figure is apparently a spot - on physical match to Billy Lovelady -

Yep, according to photographic analysis "expert" Ralph Cinque, the figure you see on the right is a guy who "looks just like" Billy Lovelady, wearing a shirt in which Ralph can plainly see a striped pattern. In Ralph's world, you only see what you want to see....

Fortunately Ralph, we do have a photo of Lovelady wearing the shirt he claimed to have worn at the very spot he claimed to be when the picture was taken. You can see it above.....he's the guy on the left.

Ralph Cinque and the Oswald Innocence Campaign.....lies heaped upon lies.