The Return of the Giant Douche

Well, to be accurate he's been back for a while. Ralphie's dramatic new year statement of his intent to withdraw from writing about JFK related matters remained in effect for precisely four days, so I apologise for not mentioning it sooner. It's just that Ralph has become so utterly irrelevant in the great scheme of things that it's hard to muster any enthusiasm for making the effort to write about him.

And in my defence Ralph hasn't written about anything that merits a response in any case, just the usual re-heated mixture of utter nonsense and long debunked lies that he's always spewing. So, dear reader, you haven't missed anything. Well until the last couple of days anyhow....

Ralphie, smarting from the lack of attention he gets these days, has decided to pick on this picture for another one of his legendary "everything is altered" rants - 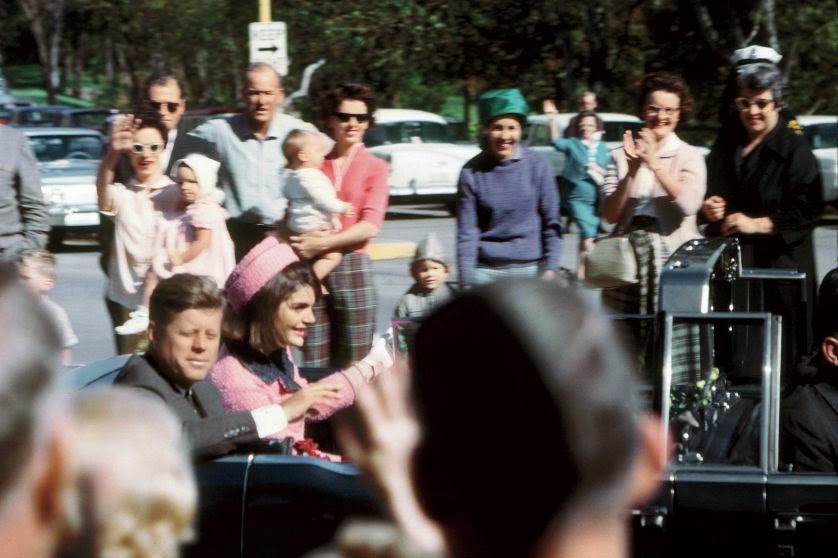 This H. Warner King slide was part of a set which was not discovered until after King's death in 2005 and published by TIME magazine in 2013. King was a keen photographer using a good camera and these clear and vibrant images are among the very best we have of that day. They don't cover any part of the actual assassination itself but are nonetheless a fascinating addition to the record. There is absolutely no logical reason to suggest that they have been tampered with in any way. In fact you'd have to be an complete idiot to seriously entertain the idea.

This is of course where Ralph comes in.

This time he's managed to convince himself that "they" are still feverishly altering photos right up to the present day, often for no readily apparent reason. This photo is, according to Cinque, "obviously heavily photoshopped". The first thing you should understand here is that "photoshopped" is just a buzzword to Ralph. He freely admits that doesn't own a copy of the program and it's painfully obvious that he would be utterly clueless as to how to use it even if he did. Still, in Ralph's mind if he tosses the term around a few times people will think he's a photoshop expert, in much the same way as he believed that having his picture taken whilst wearing a stethoscope would convince folk that he was a doctor. Unfortunately for Ralph, he's never been able to master the part which he needs to complete the illusion - being able to convey the impression that he has the slightest fucking idea what he's talking about.

Ralph's insane rambling centres around his contention that Jackie's raised arm has been added to the picture although there's absolutely no rational reason why this would have ever been done. I'm not going to cover all the reasons why he's wrong about this here ( and there are plenty of them, not least the fact that we can see both of her arms in the picture and it's very clearly her left arm which is raised, not her right as Dr Dipshit is attempting to claim ). All of this has already been done by Robin Unger ( JFK Assassination Images Blog ), Joe Backes ( The Oswald Innocence Campaign is a Fraud ) and Bpete at Fetzering Against Rational Thought. Between them they demolish every part of this latest Cinque stupidity, so you should visit their respective blogs to see the evidence. As is usual with every Ralph Cinque "find" we're provided with some moments of genuine comedy gold, and Ralph's stunning ignorance of a wide range of subjects is once again on full display.The links are on the right.

Of course, we've been down this road before. Ralph thinks he spots something in a photo and rushes into print....he's immediately shown to be wrong but instead of admitting it and moving on his massively inflated ego leads him to make ever more convoluted and ridiculous assertions in attempting to defend the original crackpot idea. Some things just never change.

I've always found it slightly odd that Ralphie has never paused to consider why "they", with unlimited funding and access to the finest minds and most highly skilled operators with which to accomplish their nefarious aims would continue to get all their photo alteration jobs done by guys who are so bad at it that their seemingly vast catalogue of errors are so easily spotted by some bozo in Texas, endlessly squinting at a computer monitor in his bedroom...