A Statement from Jim Fetzer... 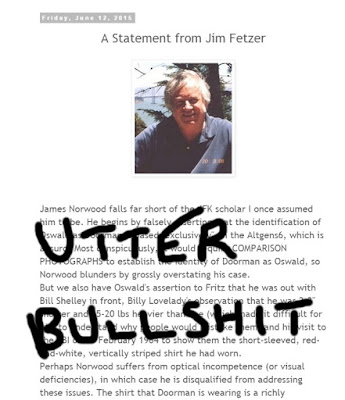 A Statement from Jim Fetzer - what he actually meant

While it's true that a while back I outed Ralph Cinque for the lying sack of shit that he is I have far too much invested in the Doorway Man scam to let James Norwood blow the lid on it.

Since it has long been my habit to lend my name and support to any old crap without bothering to think it through I am aghast to realise that James Norwood hoped to take a more "hands - on" approach to his chairmanship of the OIC than I. Frankly a man capable of independent thought is not the sort of senior member that either Ralph or myself ever envisaged for the OIC, preferring as we did a collection of photos of people who would never contact us again and a few pliable yes men whose function would be to nod occasionally but basically say nothing. Ever.

Further, in my declining years I'm anxious not to be remembered solely as the only guy who got duped by that two-bit hormone - huffing quack from Texas. I'm sure I was once recognised for much better work...I just wish I could remember what it was.

Anyway, even though I have nothing whatsoever to do with the OIC and have placed on record my utter contempt for its founder Ralph Cinque, he has still come to me crying for help like a baby. It therefore falls upon me to try to salvage what remains of the Oswald Innocence Campaign and my reputation by making up some shit about James Norwood, even though I have previously described him as an "elite" JFK researcher in his many appearances on my show.

Integrity? Over-rated, in my opinion.