Ralph Cinque has once again ventured to Dallas in another half - assed attempt to validate his debunked ramblings about the Moorman photo. Predictably, the results reveal he has no idea what he's talking about.

You'll recall that we saw here -

how the Moorman photo contains an easily identifiable reference alignment which any recreation MUST contain to have been taken from the correct position. The point sailed over Ralph's head of course, but that was to be expected. 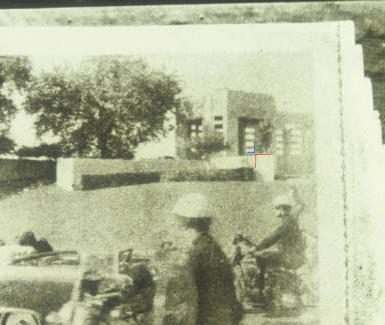 Let's see how close Ralph got...

The answer...not very close, although in all honesty a little closer than I expected. The "cross" alignment that we see in Moorman is a long way off because he's too far to the right of Moorman's true position, in keeping with his incorrect assertion that the photo was taken by the Babushka Lady, who was situated over 15 feet to the right of mary Moorman. Interestingly though, he's also a long way short of taking the photo from the correct position of the Babushka Lady.

Still Ralph, thanks for your work in proving your claims about the Moorman photo to be untrue. I knew you weren't going to let me down...

This just in from the brain of Buda....

Well in simple terms Ralph, it proves you were standing in the wrong place. It demonstrates that you were too far to the right of Moorman's position.

And in doing so it proves very nicely that the Moorman photo could only have been taken by Mary Moorman. The further from the correct position that you go, the more the alignment of the cross is disrupted. Easy really.

What you HAVE succeeded in doing is to provide a very nice demonstration of why your "Babushka Lady took it" idea is utter nonsense.