Despite the fact Ralph Cinque's claim that the Moorman photo was taken by the Babushka Lady has been proven impossible, Ralph, being Ralph, is still determined to persist with the lie. Obviously this is surprising nobody, so in this piece we'll expose a few more of his false statements about the Moorman photo and in the process attempt something which I fully expect to prove impossible - getting Ralph to give a straight answer to a simple question. 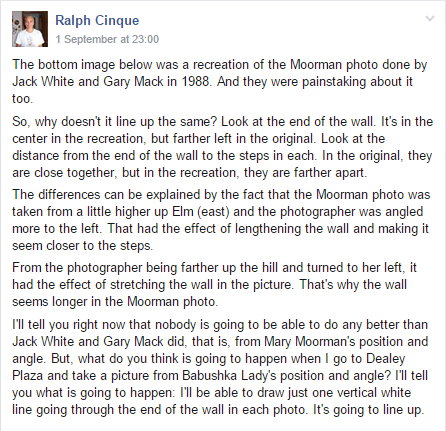 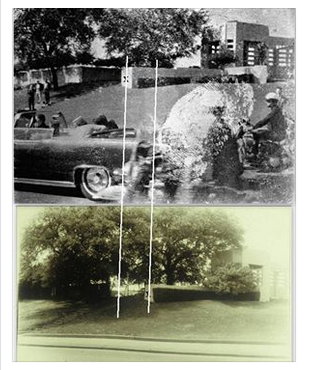 Well...where to start? The only sentence in Ralph's ramblings that contains a grain of truth is the first one, and even that isn't entirely accurate. The bottom photo in his entirely meaningless comparison was indeed produced by Jack White and Gary Mack but wasn't intended as a perfect recreation ( even though it's actually very close ). Ralph has been careful to omit the explanatory text which accompanies the picture, as we see here - 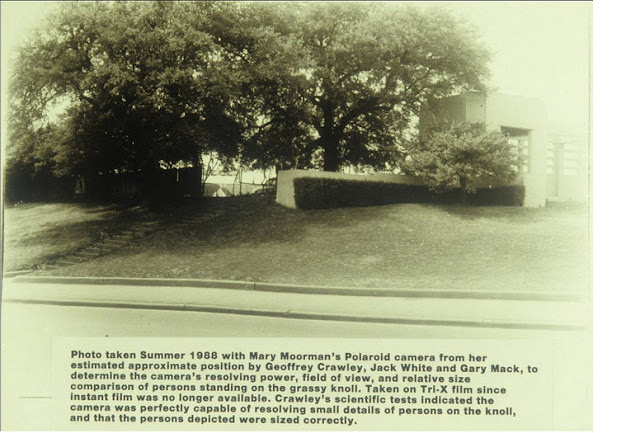 You'll notice the reason for this omission of course in the words "her estimated approximate position" and explanation of why the picture was taken. It just wasn't intended to be a meticulously accurate reconstruction, but Ralph would prefer you didn't know that. And we needn't dwell too long on the obvious fact that the pictures as presented by Ralph are obviously of different sizes and useless for a meaningful comparison. Robin Unger has addressed this issue here -
http://jfkassassinationimages.net/index.php/2015/09/03/moorman-re-enactment-done-by-jack-white-and-gary-mack-in-1988/
and we can see in his piece that when the images are resized they actually match very well.

But we can go further than that.

I have previously discussed here -
http://www.oswaldinthedoorway.com/2015/08/ralph-cinque-crucified-on-moorman-cross.html
the studies already conducted into the Moorman photo and provided links to detailed information about them. Ralph is desperate to have you believe that it's impossible to recreate the photo from Moorman's position, but the reality of course is that it's been done very well on more than one occasion. In fact both Jack White and Gary Mack produced reproductions of their own. 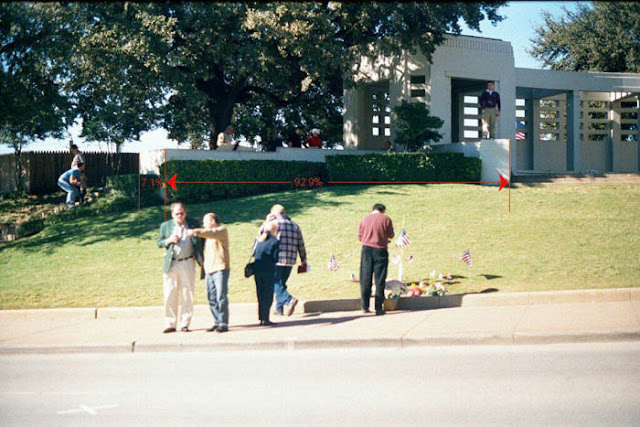 Now we'll overlay it to the Moorman photo. Notice that the horizontal red line at the bottom of the photo demonstrates how far the photo has to be tilted in order to make the vertical lines of the pergola match the Mack recreation - this is because Mary didn't have the camera perfectly level when taking the picture.

Now we can see that the Mack recreation is to all intents a near perfect reproduction of the Moorman photo...so much for Cinque's stupid claim that it wasn't possible from Mary's position. The truth is the exact opposite of course - Mary's position is the ONLY possible position the photo could have been taken from. When Ralph started to make these ridiculous claims he was of course blissfully unaware that Mary Moorman's exact position has already been the subject of close examination.

And, what of Ralph's last paragraph, where he claims he will take a photo from the Babushka position which will perfectly match the Moorman photo? Well, he now says he didn't take it.

In other words, he wants you to believe that he travelled to Dealey Plaza with a camera after spouting endless piles of garbage on this subject for weeks, took a picture from close to Moorman's location and didn't think to move a few feet to his right to take the photo from where he claims it was taken.

Does this sound even remotely plausible?

Obviously the answer is no, so the question is....where are the photos Ralph?

Of course, you can be absolutely certain that Ralph attempted to take the picture from the Babushka position. You can be equally certain that the results proved all of his claims about the Moorman photo to be false.

Ralph, being Ralph, will continue to lie abut this, but lies are all he has left.

Fortunately at some point in the not-too-distant future some REAL researchers are going to take that photo for us, so we're going to get to see exactly why Ralph didn't want to publish his attempt...